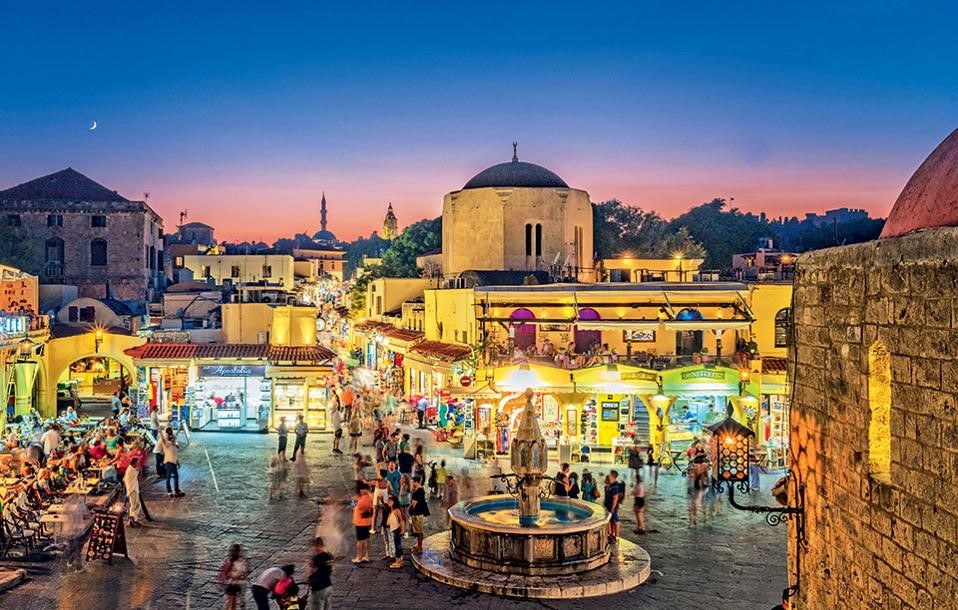 From 1309 to 1523 Rhodes, the largest island of the Dodecanese, was occupied by the Knights of St John of Jerusalem who had lost their last stronghold in Palestine, in Acre, in 1291. They transformed the island capital into a fortified city able to withstand sieges as terrible as those led by the Sultan of Egypt in 1444 and Mehmet II in 1480. Rhodes finally fell in 1522 after a six-month siege carried out by Suleyman II.

The medieval city is located within a 4 km-long wall. It is divided with the high town to the north and the lower town south-southwest. Originally separated from the lower town by a fortified wall, the high town was built entirely by the Knights. The Order was organised into seven “tongues”, each having its own seat, or “inn”. The inns of the tongues of Italy, France, Spain and Provence lined the principal east-west axis, the famous Street of the Knights, on both sides – one of the finest testimonies to Gothic urbanism. To the north, close to the site of the Knights’ first hospice, stands the Inn of Auvergne, whose facade bears the arms of Guy de Blanchefort, Grand Master from 1512 to 1513. The original hospice was replaced in the 15th century by the Great Hospital, built between 1440 and 1489, on the south side of the Street of the Knights.

The lower town is almost as dense with monuments as the high town. In 1522, with a population of 5000, it had many churches, some of Byzantine construction. Throughout the years, the number of palaces and charitable foundations multiplied in the south-southeast area: the Court of Commerce, the Archbishop’s Palace, the Hospice of St. Catherine, and others.

The ramparts of the medieval city, partially erected on the foundations of the Byzantine enclosure, were constantly maintained and re-modelled between the 14th and 16th centuries under the Grand Masters. Artillery firing posts were the final feature to be added. At the beginning of the 16th century, in the section of the Amboise Gate, which was built on the northwest angle in 1512, the curtain wall was 12 m thick with a 4 m-high parapet pierced with gun holes. The fortifications of Rhodes exerted an influence throughout the eastern Mediterranean at the end of the Middle Ages.